I was going through Buffer and Window in RX, thought a few examples would help clear the differences.

First create a buffer of even numbers, each buffer having 5 items:

(we can ignore Timestamp() for now, that will be used later when we see how buffering and windowing work with streams with items coming in over time)

Output: Buffers created with 5 items in each buffer

Odd numbers stream with window with 5 items in each:


The line .Window(5,5) means the window will have count of 5 items, and the next window will be created after skipping these 5 items. (count, skip) or (range, slide).

So .Window() gives back IObservable

A new buffer starts as soon as there are n items are in it. However a window needs two things, the items to be in it, and how far to slide the window. In a window it's possible that you process an item in the stream again, but that's not possible in buffer.

Here is an implementation of visitor pattern to resolve that problem:

Since Accept is inside the class, we use the type of (this) to call the visitor.

What do you think about the GetEmployeeType() method that will be called - will it be on Employee class or Manager class?

Since Employee object 'e' points to Manager, it will call the GetEmployeeType of Manager class.

Since the object is of type Employee the CalculateSalary accepting Employee will be called.

Taking this further, let's move the CalculateSalary to a class.


As you can see, CalculateSalary(Manager) is not at all called. This is because the method to call is decided at compile time and the declared type is used to identify the method not the runtime type.

A quick way to fix this is to use "dynamic" keyword:


Another way to resolve this is to use Visitor pattern.

EDIT: Post that implements Visitor pattern to resolve this problem.

I purchased Kindle book: "A smarter way to learn Python" and completed all its exercises.
Finally I got the certificate from the author: ye! 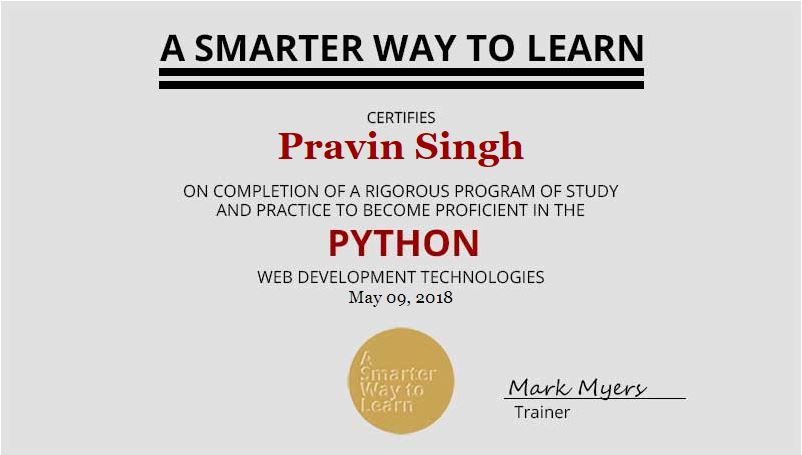 
Define a function and call it:

Two types of arguments: positional and keyword:
Positional - defined by order of parameters in the method
Keyword - use the parameter name when calling the function

You can forget what order to use when all of your arguments are keyword arguments:

In the call below, the first argument of value "1" is taken in as parameter "first_num" based on it's position, so defining it again as keyword Python will give error:

Default value:
Set a default value for a parameter in the method definition by using "=" sign.
In this example, the second_num parameter defaults to value of 5.
You can skip passing in second argument and the function will run fine.


If you don't want to use default value of 5, then call the function the usual way.


If you have many default parameters, you can use keyword to assign a different value to one of them and skip the rest. For example:

I have concluded that I a need a skill-upgrade. Although my day to day work requires C# and bit of Java, this is not going to be enough.

Javascript is no longer something that I can ignore, neither is Python. In fact JS has come a long way to be used to build a variety of applications - great UIs to services.

And Python, nothing more can be said about it. This language has become such that every programmer should know at least how to read Python code.

So this year, embarking on journey to learn Python and JS along with Angular/TypeScript - at least to the level of intermediate programmer.

Of course along with this delving deeper into core areas such as agile patterns and SOLID principles.
at April 30, 2018 No comments:

I was going through Buffer and Window in RX, thought a few examples would help clear the differences. First create a buffer of even numbe...